“Ya got trouble folks,” sang Professor Harold Hill, the con man in The Music Man,

“Right here in River City
Trouble with a capital ‘T’
And that rhymes with ‘P’ and that stands for pool!”

Professor Hill convinces the town that forming a band will save the youth of River City from the depravity sure to result from them spending their days playing pool. I’m afraid that I was once one of those youths that took up pocket billiards, though in my case that didn’t require frequenting a pool hall. I just had to go downstairs.

For years, my dad ran his accounting business out of the basement of our home. When his business moved to a different location, the basement became home to a pool table. I was in high school at the time, and worked to convince my parents that a pool table was just the thing to put there.

It was quite a challenge to get the table downstairs. A carpenter had to remove most of the stairs and several of us stood the table on end and lowered it to the floor. It just fit the space; some shots required use of a junior-sized cue since the walls were too close to the table to use a full-sized stick. My friends and I were the ones who made most use of the table. I eventually got proficient enough to at times sink a half-dozen or so shots in a row.

The table was used quite a bit for perhaps a dozen years, but it fell into disuse once my brother, sister, and I moved away from home. Eventually, my parents’ grandchildren were old enough to play an occasional game. When I returned home to help my parents in 2012, the table was still there, used only as a flat surface for temporary storage or for wrapping presents. 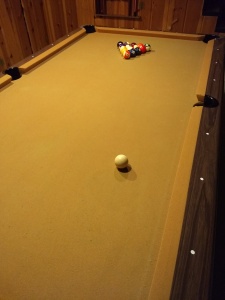 Last fall, I decided to play pool again, and have regularly done so now for the better part of a year. Most evenings shortly before bed I go downstairs, rack the balls, and shoot at them until the table is empty.

I find myself looking forward to this nightly ritual. Partly, it’s because I’m reminded of the countless games I played a half-century ago in that very spot. I’m connected to my younger self and to the friends that came over to play with me. The table shows signs of wear: the cloth is threadbare in places and there are dead spots in the rail cushions. As such, it is an old friend: timeworn but still stalwart, welcoming my attentions.

Playing pool is not just a matter of nostalgia, though. I like the sensory aspects of the game: the smooth barrel of the cue stick as I slide it forward between my fingers; the sharp crack of the break, balls scattering as if in panic; the playroom-bright colors of the balls as they lie on the cloth like Easter eggs waiting for a child to basket them; the click of ball against ball; and the satisfying clunk as each ball is holstered in a hole, followed by the rumble of its run down the ball return and thunk as it tumbles into the collection receptacle. A pool game is a well-balanced world of sight and sound, of stasis and movement. 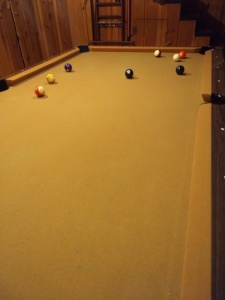 It is for me a calming world. Most of the day, I’m prone to what Buddhists call “monkey mind,” which is to say that my thoughts are unsettled, restless, and inconstant. I jump between past, present, and future, from one topic to another. I would prefer that my mind be more steady and focused, but that’s not easy to achieve. Playing pool puts the monkey mind to sleep. I’m paying attention only to the table and its contents. I think just of the physics of the shot that I’m about to take, or at most of that shot plus what I hope the next shot will be. I have to concentrate intently on where I want the ball to go, and get immediate feedback (in the form of a missed shot) if I let my concentration lapse. For me, pool evokes mindfulness better than reading, yoga, or breathing exercises–it’s about on a par with meditating on Scripture or an early morning jog.

This settling effect of pool is more pronounced for me than it was in my teens and twenties. Back then, I was focused on improving my game, and would be unhappy with myself when I missed easy shots. Now, I’ve accepted that I’m at best a slightly above average pool player. So a missed shot is useful feedback as to whether I am concentrating, but is not an occasion for judgment. For me, a pool shot matters sufficiently to absorb me in the moment, but matters not at all afterwards. It’s useful for all of us to have something like that in our lives. 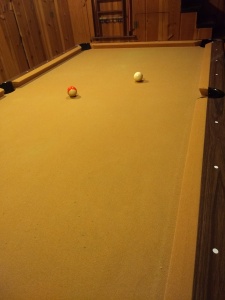 I am a fourth-generation American of Dutch ancestry and am trained as a clinical psychologist. In 2012, I retired from Methodist University in North Carolina to return to . Michigan to help family. I maintain a part-time therapy practice in Grand Rapids. I currently worship at Monroe Community Church in Grand Rapids. I can be reached at bobritzema@hotmail.com.
View all posts by Bob Ritzema →
This entry was posted in Resources, Spirit and tagged aging, hobbies, memory, pool table, reminiscence. Bookmark the permalink.

2 Responses to Playing Pool While Old