Recovering From Loss: Giving Back 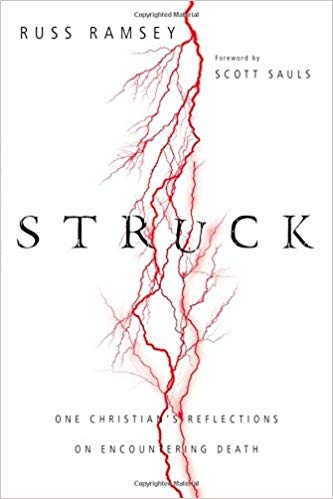 In his book Struck: One Christian’s Reflections on Encountering Death (IVP Books, 2017), Russ Ramsey, pastor at Christ Presbyterian Church in Nashville, Tennessee, tells the story of his encounter with a life-threatening illness. Ramsey developed a persistent fever caused by a blood-borne bacterial infection that attacked his mitral valve. He spent his fortieth birthday awaiting the surgery needed to repair his heart. The surgery saved his life, but beat him up rather severely:

“When I woke from surgery I was a mess. I had a broken sternum, a dead left foot, a malfunctioning brain, gallons of medications pulsing through my body, a puncture wound in my chest from the drainage tube, and the thick fog of sedation still hovering over me.” p. 79

Ramsey details his recovery from these and other afflictions. By the end of the book, two years after his surgery, he has recovered sufficiently to climb a fourteen-thousand foot mountain peak. It was quite a struggle to get to that point, though. Nearing the one year mark, he described the losses he had sustained. His relationships were affected–though others gave support, he felt isolated from them. His body didn’t function for a time. His short-term memory and mental acuity were affected for quite a while. He lost for a time the roles that defined his identity.

Ramsey felt an affinity with a friend whose life was also severely affected by illness. Barbara had been dealing with cancer for five years. After a period of remission, the cancer had returned. In between their respective treatments, Russ and Barbara would meet to compare notes. Barbara had been determined to beat the cancer, and did for a time. Not only did the cancer return, though, it metastasized. Barbara died at home under hospice care. Ramsey worked with her husband John on the funeral arrangements. He had been asked to preside, and assuming that role helped him regain what he had lost:

“Barbara was honoring my life by calling on me to officiate the celebration that marked the end of her suffering. It had been a while since I had stood on such sacred ground, and it occurred to me that her funeral marked a certain milestone in my own recovery. I was now returning to the work of bearing the burdens of others–work I had been unable to do only months before.” p. 126

The experience was one of being restored or healed. For Ramsey, the climax occurred at the graveside, while John was lowering Barbara’s casket into the ground. In a sense, while her body was descending, his soul was being lifted up, as if they were on opposite ends of a teeter-totter. He writes,

“I felt a hibernating sense of purpose come awake. As I looked at his family and at the crowd that had gathered, I considered my role as the officiate of this unfolding drama and I remembered who I am. I am a pastor. I shepherd people’s hearts. This is what I do.”

Ramsey then makes an important point regarding the way in which we move beyond mourning our losses:

“Healthy mourning eventually requires us to not only receive acts of compassion but also to give them…. I had spent the better part of the year mostly on the receiving end of help. This funeral, one year after my affliction, was a significant part of my healing.”

When we see others struggling with loss, we want to come aside them and help them in some way, and that is a good impulse. After a time, they may offer us something in return. We’re often tempted to turn down their offer, encouraging them instead to just focus on their recovery. What we may miss is that helping others as they’ve been helped is part of their recovery. Let’s accept what they offer with gratitude, knowing that in this, too, they are being restored.

I am a fourth-generation American of Dutch ancestry and am trained as a clinical psychologist. In 2012, I retired from Methodist University in North Carolina to return to . Michigan to help family. I maintain a part-time therapy practice in Grand Rapids. I currently worship at Monroe Community Church in Grand Rapids. I can be reached at bobritzema@hotmail.com.
View all posts by Bob Ritzema →
This entry was posted in Body, Relationships and tagged aging, dying, elderly, health, illness, purpose, Russ Ramsey. Bookmark the permalink.