Living in an Age of Accumulation 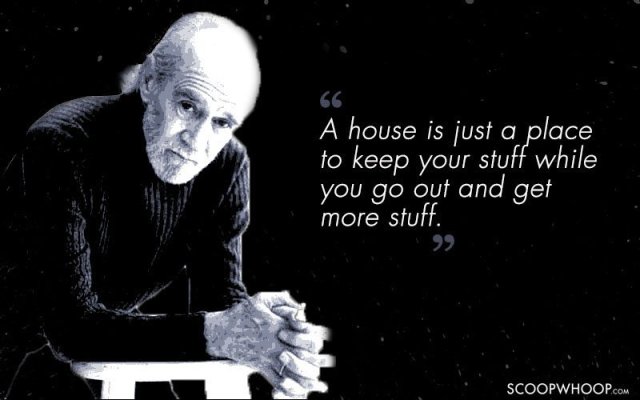 George Carlin may be right about a house being a place to keep our stuff, but, nowadays, we’re less inclined to leave home in order to get more stuff. That’s because more stuff regularly appears magically on our doorsteps while we lounge around the house. Online shopping is so easy! In America and other first world countries, this is an age for accumulating stuff. According to a recent article by staff writer Alana Semuels in the Atlantic, Americans in particular are amassing stuff with tremendous ease:

“Before the advent of the internet, we had to set aside time to go browse the aisles of a physical store, which was only open a certain number of hours a day. Now, we can shop from anywhere, anytime—while we’re at work, or exercising, or even sleeping. We can tell Alexa we need new underwear, and in a few days, it will arrive on our doorstep. And because of the globalization of manufacturing, that underwear is cheaper than ever before—so cheap that we add it to our online shopping carts without a second thought.”

And shipping is often free. Online retailer Amazon currently has over 100 million Amazon Prime members, who, among other benefits, pay nothing for two-day shipping. It can even seem frugal to order more stuff to take full advantage of that $119 per year membership fee.

Reading Semuels’ article made me think of a post I wrote a few months ago about the capital vice of greed. Merriam-Webster’s online dictionary defines greed as “a selfish and excessive desire for more of something (such as money) than is needed.” Desiring more than what is needed certainly seems to aptly characterize we 21st century American consumers. Here’s what Semuels has to say about our spending habits:

“In 2017, Americans spent $240 billion—twice as much as they’d spent in 2002—on goods like jewelry, watches, books, luggage, and telephones and related communication equipment, according to the Bureau of Economic Analysis, which adjusted those numbers for inflation. Over that time, the population grew just 13 percent. Spending on personal care products also doubled over that time period. Americans spent, on average, $971.87 on clothes last year, buying nearly 66 garments, according to the American Apparel and Footwear Association. That’s 20 percent more money than they spent in 2000. The average American bought 7.4 pairs of shoes last year, up from 6.6 pairs in 2000.”

I’ve been trying to imagine a scenario in which someone needed 66 new garments a year, and I can’t, except perhaps an infant quickly outgrowing one size after another. As for 7.4 pairs of shoes, I picture someone with pronated ankles training for a marathon, but how often does that happen? Most of us just want ever-increasing amounts of stuff–all kinds of stuff, stuff we don’t need. Our closets are full, our landfills overflow, and storage-unit rental is at an all-time high.

Paradoxically, as we gain possessions we lose that which is of much greater importance. As I pointed out in the earlier post, greed impoverishes us spiritually. We seek to be self-sufficient, relying on ourselves for everything and on God for nothing. As a result, our relationship with him atrophies.

A few months ago I sold the house I had for 12 years with the intent of moving nearer one of my sons and his family. I had donated quite a bit of furniture, clothes, and the like in preparation for the move. Still, as I packed up my things and put them in storage, it seemed like I had lots more stuff than a single, 70-year-old man has need of. When I then looked for houses in the area to which I hoped to move, one consideration was how big a house I should buy in order to accommodate my possessions. Houses less than about 900 square feet didn’t seem quite big enough. I ended up making an offer on a house with 1,250 square feet–about 500 square feet less than what I had had before, but still rather big for one person. I’m hoping that, once I move in, I’ll only buy what I need and will in fact continue to prune away what I’ve accumulated over the years.

Ridding myself of the material things I don’t need is a sort of spiritual discipline, an emptying of that which might preoccupy me in order that I can become more receptive to what I do need. I’m hopeful to continue the process of material simplification, yet also mindful that I’ll have to swim against the cultural current in order to be successful. I promise to update readers about how I’m doing!

I am a fourth-generation American of Dutch ancestry and am trained as a clinical psychologist. In 2012, I retired from Methodist University in North Carolina to return to . Michigan to help family. I maintain a part-time therapy practice in Grand Rapids. I currently worship at Monroe Community Church in Grand Rapids. I can be reached at bobritzema@hotmail.com.
View all posts by Bob Ritzema →
This entry was posted in Culture, Psyche and tagged consumerism, decluttering, faith, materialsim, older adults, simplification. Bookmark the permalink.