Adults supposedly gain wisdom as they age, but there are plenty of exceptions. Shakespeare’s King Lear is certainly one of these. As I wrote earlier, Lear foolishly elicits exaggerated professions of love from his daughters, disinheriting the one who is unwilling to play along. He’s unaware that his behavior has caused his other daughters to think little of him. After each in turn reneges on promises they made in order to receive a portion of his kingdom, he goes into a rage. At the end of Act II, he storms out of the castle where they are staying, essentially having a senior adult temper tantrum. He won’t continue long in his folly, though, for he is about to be transformed.

A storm is brewing, and Lear’s willingness to plunge ahead in such inhospitable conditions shows that his sanity is slipping. He addresses the storm, noting that, unlike his children, the storm has no obligation to treat him well:

“I never gave you kingdom, call’d you children,
You owe me no subscription: then let fall
Your horrible pleasure….” Act III: Scene 2: Lines 16-18 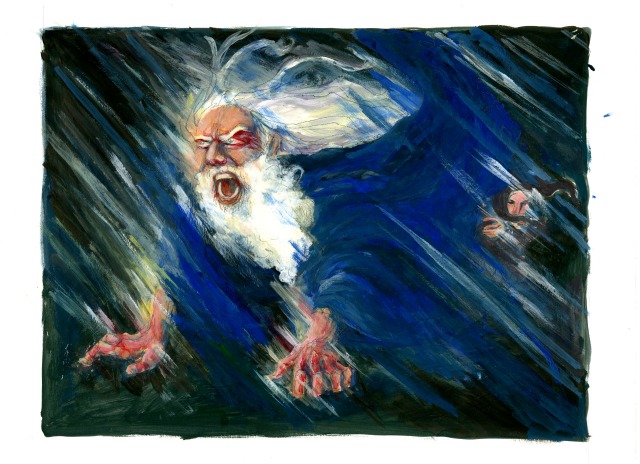 Lear in the Storm. Image from suziglass.tumblr.com

Buffeted by wind and rain, he realizes that royalty offers him no protection. Indeed, he is feeble and vulnerable:

A bit later, he decides that the storm is an agent sent by the gods to bring wrongdoers to repentance. He’s not quite ready to admit the extent of his own misdeeds, though:

The storm rumbles on, eroding his defenses. When we recognize our mortality we often become humbler, less sure of our own importance. Recognizing that we ourselves have needs can make us more sensitive to the needs of others. A few lines later Lear turns to his Fool, who like him is barraged by the elements, and says,

It’s the first time Lear shows compassion for anyone. A few scenes later, he ‘s tempted to feel sorry for himself:

In such a night
To shut me out! Pour on; I will endure.
In such a night as this! O Regan, Goneril!
Your old kind father, whose frank heart gave all…” III:4:17-20

But, uncharacteristically, he doesn’t stop only with his own misfortune. He thinks of all those who have no protection from the storm:

“Poor naked wretches, whereso’er you are,
That bide the pelting of this pitiless storm,
How shall your houseless heads and unfed sides,
Your loop’d and window’d raggedness, defend you
From seasons such as these? O, I have ta’en
Too little care of this!” III:4:28-33

He not only has sympathy for human need, he regrets his former indifference. As Lear shows more and more signs of mental instability–he refuses shelter, identifies an apparently mad wanderer as a philosopher, and stages a bizarre mock trial of his daughters–he is at the same time becoming increasingly aware of human suffering and developing greater concern for others. In the next act, Lear has apparently lost his senses–he’s adorned himself with wild flowers and rambles disconnectedly–yet is more perceptive and insightful than ever. For example, he seems to have realized the flattery he received when king was all false:

He also recognizes that wealth and glamour often hide corruption:

“Through tatter’d clothes small vices do appear;
Robes and furr’d gowns hide all. Plate sin with gold,
And the strong lance of justice hurtless breaks:
Arm it in rags, a pigmy’s straw does pierce it.” IV:6:166-169

Lear is gaining wisdom; despite his madness, he could now rule more justly than he did when in his right mind. His estimation of himself has plummeted (“I am a very foolish, fond old man” IV:7:60), and he no longer expects complete deference from others. In fact, he recognizes the need to apologize to those he has wronged, such as disinherited daughter Cordelia:

Finally, he learns to love. Freud thought that love and work were the signs of maturity. When the play starts, Lear apparently has had some success in his work, but seems incapable of love. Yet, in the final act, his love for Cordelia seems to have replaced any concern he has for himself. He’ll even go to prison cheerfully if she can be with him. Alas, she is killed, and he howls his grief:

He dies of heartache. Before he dies, though, he has become a mature human being, one who knows his limits, who feels compassion for others, who sees himself accurately, and who loves. Would that the storms of life always have such effect on us!

I am a fourth-generation American of Dutch ancestry and am trained as a clinical psychologist. In 2012, I retired from Methodist University in North Carolina to return to . Michigan to help family. I maintain a part-time therapy practice in Grand Rapids. I currently worship at Monroe Community Church in Grand Rapids. I can be reached at bobritzema@hotmail.com.
View all posts by Bob Ritzema →
This entry was posted in Psyche and tagged aging, elderly, madness, maturity, older adults, Shakespeare, wisdom. Bookmark the permalink.