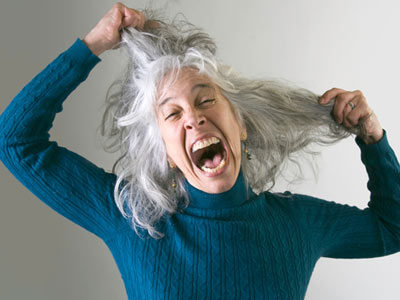 You’re not stress-free, are you? Neither am I. And we won’t rid ourselves of stress, either. If you’re a middle-aged adult working long hours, raising kids, negotiating relationship problems, cooking, cleaning, and trying to keep your environment from falling into ruin, you know what stress is. You may look forward to the day when all these demands on you will subside, and life will be relaxed and peaceful. Talk to those of us whose kids have grown and who are fully or partly retired, though, and you’ll learn that no one is without stress. Maybe we seniors don’t have the time pressures that younger folks do, but we have stresses of our own–doctor’s appointments, illnesses, financial strains, losses, troubled relationships, and uncertainty about the future. Alleviate one stress–moving out of a now-too-big house–and you create another–adjusting to a new home.  What stress would you like in life? Don’t say ‘none’ because that isn’t an option.

As an adult in my 60s, I don’t think I could still manage all the family, work, and community responsibilities I had 30 years ago. Is that simply because I have less energy than I did, or does it mean my ability to handle stress is deteriorating? Will I eventually not be able to tolerate stress at all?

I was reassured when I found a study that looked a reactions to stress in younger and older adults (the reference is: Oliver K Schilling and Manfred Diehl, Reactivity to stressor pile-up in adulthood: Effects on daily negative and positive affect. Psychology and Aging, Vol 29(1), Mar, 2014. pp.72-83). The study participants completed measures every evening for 30 days, indicating what stressors they had that day. They also completed a scale measuring their emotions each day–there were ten  emotions, half positive and half negative.  The researchers found no significant differences in the amount of negative emotion that younger and older adults experienced in response to multiple stresses that hit in close proximity. That’s nice to know; according to this study, anyway, there doesn’t seem to be any age-related deterioration in how a day filled with stressful events affects us.

The news was even better when it came to “stressor pile-up.” The term refers to the times when we’re hit by stressful events day after day. Do older adults get more worn down emotionally by those runs of misfortune–sickness one day, a computer crash the next, then a falling out with a friend, a lost wallet, and on and on? No. Actually, older adults have fewer negative emotions than do younger adults when stressors pile up over a number of days. In this sense, we get better, not worse, at handling stress.

Why might older adults be better at handling such cumulations of stress? The authors suggest that over the years we may have developed more effective strategies for handling stress than those used by younger persons. For example, we may be better at finding the positives in a bad situation or putting things in context. These strategies may take time to implement, so that older adults are just as unhappy as younger adults the same day that multiple stresses hit. However, as stress continues, the effectiveness of their more self-reflective strategies become apparent.

The study is limited in that it compared different groups of old and young adults rather than following the same adults over the years; it’s also limited by the particular sample and measures used. Still, it’s nice to have evidence suggesting that stress management improves as we age. Maturity has its benefits!

I am a fourth-generation American of Dutch ancestry and am trained as a clinical psychologist. In 2012, I retired from Methodist University in North Carolina to return to . Michigan to help family. I maintain a part-time therapy practice in Grand Rapids. I currently worship at Monroe Community Church in Grand Rapids. I can be reached at bobritzema@hotmail.com.
View all posts by Bob Ritzema →
This entry was posted in Psyche and tagged aging, coping, elderly, older adults, stress. Bookmark the permalink.