Doing and Being in Elderhood

In his book What are Old People For?, Dr. Bill Thomas says: “Simple observation has led me to see life as a dynamic and unfolding interplay between the states of doing and being.” According to Thomas, doing occurs “when we come into relationship with and manipulate the visible, material world that surrounds us.” Thus, doing produces results. In contrast, being “concerns itself with things that cannot be seen.”  In particular, when we are in a state of being we are able to create and sustain relationships–for example, husband and wife, or parent and child. For Thomas, adulthood is a time of life when doing predominates over being, whereas in elderhood being predominates over doing.

“The die is cast. That which I have been able to do, to learn, or to acquire is gradually losing its value.  The doing and the having are giving way to the being. What is important for the aged is not what they are still able to do, nor yet what they have accumulated and cannot take with them. It is what they are.”

I am still active in my career and am writing quite a bit, so I’ve not finished my doing. Yet I don’t put as much importance on my efforts as I used to. I recently talked with a middle-aged woman who for decades tried to do as much as she could in order to prove her worth. A year ago she was in a serious accident that not only took her out of the workplace but also left her flat on her back, requiring care from others to meet her basic needs. For the first few months, she fretted about all the things she couldn’t do. At times she felt despair. She eventually turned to prayer, no longer just in passing but as a place she settled for long periods. She began to sense God was with her, not urging her to try harder but loving her as she was. Now, she is less concerned than ever about proving her worth and is more able to enjoy the simple pleasures of just being. As I listened, I marveled that her illness, which started as a curse, has become a means of blessing.

I wonder whether my gradual, rather fitful movement from prioritizing doing to prioritizing being will take me along the same path. A wry saying sometime repeated by those who are overly busy goes, “God put me on this earth to do a certain number of things before I die. I’m so far behind that, at this rate, I’ll never die.” But little by little those things on the perpetual to-do list that we all have in our heads (some also write the list out for good measure), lose their importance. We end up realizing that our lives consist of much more than just accomplishments. I hope I live long enough into elderhood that I’ll be able to enjoy the delights of a life of diminished doing but enhanced being, a life where “to-do” has been mostly replaced by “to-be.” 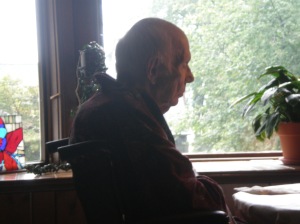 Dad in 2012, when life was almost all being, almost no doing.

I am a fourth-generation American of Dutch ancestry and am trained as a clinical psychologist. In 2012, I retired from Methodist University in North Carolina to return to . Michigan to help family. I maintain a part-time therapy practice in Grand Rapids. I currently worship at Monroe Community Church in Grand Rapids. I can be reached at bobritzema@hotmail.com.
View all posts by Bob Ritzema →
This entry was posted in Psyche and tagged adulthood, aging, Bill Thomas, busyness, elderly, faith, maturity, older adults, Paul Tournier. Bookmark the permalink.