Mom On Her Own

When my dad went into a nursing home on June 4, it was the first time that he and my mom lived apart in their 68 years of marriage. Mom was exhausted from caring for him. I expected she would regain her strength in a few weeks, and she has. I was unsure of how she would respond emotionally to dad’s absence. What would it be like for her to live without dad? Would she want to spend as much time as possible with him at the nursing home? Would she feel lost, or be overcome by loneliness? Or would she reach out to all the friends whom she had seldom seen while she was caring for dad?

The most difficult thing for her seems to be her frustration about not being able to give dad much help. She has been bothered that he has shown even more signs of decline since moving to the nursing home. Several times she has mentioned that he was doing better and was happier when he was at home. She goes to visit him about every other day, spending about an hour with him each time. It can be draining for her to visit, especially when he is clearly unhappy and her efforts to cheer him up aren’t successful. She knows he would like her to be there constantly, but realizes her limits and stays away some days so that she can recover physically and emotionally. 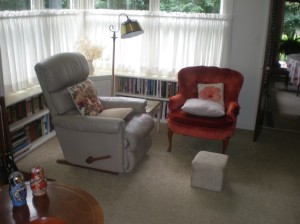 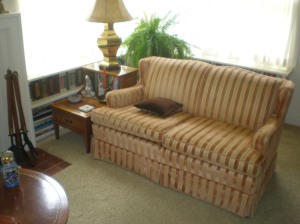 Mom has commented that she has much more time than she did when she was with dad constantly. She’s used that time in a number of ways. She looked through stacks of old pictures to find ones to display in the memory box in dad’s room at the rest home. She also enlisted my brother-in-law and myself to move some furniture. Dad’s recliner went to the rest home with him, so she had to fill that space. She didn’t content herself with the simplest possible rearrangement, though, but recreated a sitting area in the living room similar to what was there decades ago. Jane Gross recently wrote at the New Old Age Blog about an elderly friend who, after losing her husband to Alzheimer’s, moved on by making countless little changes to her house. My mom may be intuitively using the same coping strategy.

Mom has a limited field of vision due to a stroke, can’t drive, and is uncomfortable in unfamiliar environments. Other than trips to see dad, she didn’t leave the house any more the first month than she had been doing previously. The second month, though, she returned to some places that she hadn’t gone to for years. I offered to bring her to her church, and one Sunday morning she decided to go. She had been watching DVDs of church services at home, but enjoyed being back in the congregation again. She also accepted my sister and brother-in-law’s offer to visit their cottage (years ago, she and my dad were co-owners of the cottage, so she was going to a place she had vacationed many times). I drove her up there Friday afternoon, she stayed overnight, and my brother brought her back home the next evening. She said it had been six years since she had stayed overnight somewhere other than her home. We went into Pentwater, Michigan, near the cottage, for a Friday evening Art Stroll. Eating dinner afterwards at an outdoor restaurant, she looked around at all the diners and remarked with a bit of incredulity in her voice that there is a whole world out there that she has been missing. She seemed happy. 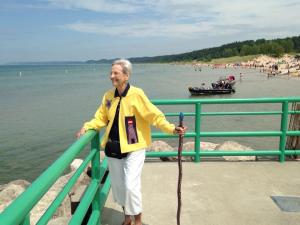 Mom seems to be adapting fairly well to this huge change in her life. I’m proud of her for how she is doing. I suspect that, like mom, other older adults who have borne a heavy burden of caregiving for a spouse experience some disorientation but then have a revival of their former selves when the burden is lifted.

I am a fourth-generation American of Dutch ancestry and am trained as a clinical psychologist. In 2012, I retired from Methodist University in North Carolina to return to . Michigan to help family. I maintain a part-time therapy practice in Grand Rapids. I currently worship at Monroe Community Church in Grand Rapids. I can be reached at bobritzema@hotmail.com.
View all posts by Bob Ritzema →
This entry was posted in caregiving, Psyche and tagged aging, caregiving, change, elderly parents, older adults. Bookmark the permalink.

2 Responses to Mom On Her Own