I’ve been blogging recently about cancer. This topic has been on my mind since I am about to have my cancerous prostate removed. One thing I have been reflecting on is culture’s dominant metaphor for dealing with life-threatening illness. I’m wondering whether this metaphor is the best way to characterize what we go through when faced with such illnesses.

What metaphor am I referring to? It’s one that comes up regularly in conversations with survivors and is often included in the life narrative portion of obituaries, e.g. “I’ve been fighting cancer,” “after a long battle with congestive heart failure,” or “she struggled with multiple medical problems.” The dominant metaphor is of a war or battle. Eugene Peterson has suggested that there are two basic types of story, fights and journeys. The stories we tend to tell about our encounters with illness are fights.

Is this the best type of story to tell, though? State writer Katy Waldman suggests that urging people to fight cancer or other serious illnesses puts an unfair burden on them. If they succumb, the implication is that they didn’t fight hard enough, and that in turn can lead to feelings of guilt or inadequacy. I will eventually die of something; I don’t particularly like the idea of being considered a loser after my last battle, the one that I had no chance of winning.

So what’s the alternative? Waldman prefers journey language to fight language. She cites the press release subsequent to the death of theater actor and director Roger Rees in July, 2015, which stated that Rees had “passed away … after a brief journey with cancer.” For her, the term “journey” evoked the image of “a man walking slowly into the sunset, hand in hand with an adumbral figure.”

Holding hands with cancer doesn’t sit well with me. That seems to be friendship language, and I don’t see cancer as my friend. Plus I don’t like an image that portrays cancer as my only or primary companion during this phase of life. An alternate image that comes to mind is being handcuffed or tied to cancer, but the element of coercion in those metaphors contains too much battle, not enough journey. How about walking alongside cancer, trying to maintain some distance but realizing that the path isn’t wide enough to keep from brushing against it from time to time?

Waldman rejects the alternative metaphor of “a journey through (rather than with) cancer. I like that better–or, to be more specific, I like an elaboration of that image. Thinking of a journey through cancer reminds me of the book of Psalms, especially the best known Psalm, number 23. God is compared to a shepherd, and his followers to sheep. The psalmist emphasizes God’s protection in times of danger:

Even though I walk
through the darkest valley
I will fear no evil,
for you are with me.

Some older translations refer to the valley as “the valley of the shadow of death.” That’s cancer–the dark valley, the one where death casts its shadow. That’s where I’m walking. As I see it, the journey through this valley is not a solitary one, or one in which cancer becomes my primary companion. It’s God, not cancer, who is walking beside me. There may be a battle in store, but it is not my battle, it is God’s. Should I die, it would be in God’s presence. Such a death is nothing to fear, and is neither failure nor evil. It is the start of another journey, one of homecoming. 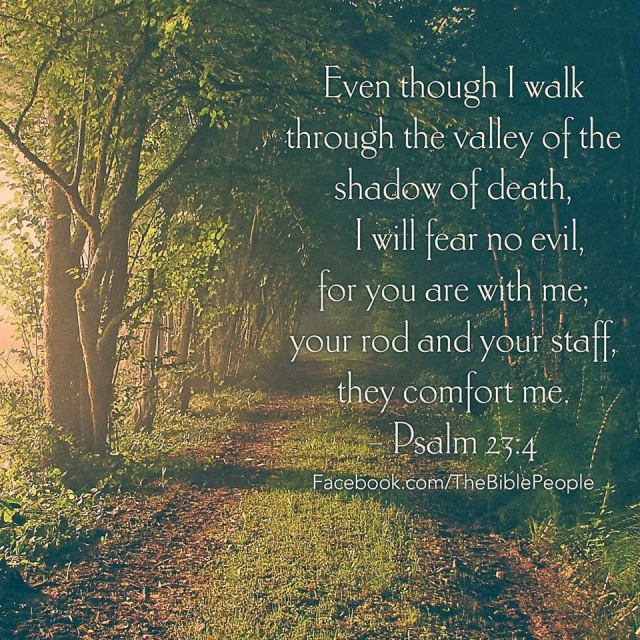 I am a fourth-generation American of Dutch ancestry and am trained as a clinical psychologist. In 2012, I retired from Methodist University in North Carolina to return to . Michigan to help family. I maintain a part-time therapy practice in Grand Rapids. I currently worship at Monroe Community Church in Grand Rapids. I can be reached at bobritzema@hotmail.com.
View all posts by Bob Ritzema →
This entry was posted in Death, Spirit and tagged aging, cancer, death, elderly, faith, God, illness. Bookmark the permalink.