Is It Just About The T-Shirt? Experiences Of A Race Day Volunteer

I’ve been a runner/jogger for over forty years, and am thankful that my old hips, knees, and ankles still can churn along faster than walking pace. Last year, I ran in a local 5-kilometer race (the Calvin Spring Classic). As I wrote at the time, running with others provided good motivation to put forth maximal effort. Another benefit was the enjoyment of running with hundreds of others. This particular event appealed to me as well because the entry fee supported scholarships at my alma mater.

I considered entering the race again this year, but got the flu three weeks before the date. I didn’t run for a week and a half and even now am plodding along quite slowly. I tell myself that my race time doesn’t matter, that participation is the important thing. Faced with the prospect of entering for a race and then running even more slowly than my usual training runs, though, I discovered that race time did indeed matter to me.

Instead of running, I reasoned, I could volunteer to help put on the race. I could still support the cause and would be given a free race t-shirt as an inducement. I signed on the race website a couple days before the race, thinking they would be begging for volunteers and I could have my pick of positions. Virtually every slot was filled. What a surprise! Either there are scores of altruistic people eager to give their Saturday morning for a good cause or those t-shirts are a highly effective incentive. (Or, this being a college campus, course credit may play some role–pure speculation, but I wouldn’t be surprised.)

There was a slot open on the packet-pickup team, so I signed up. We didn’t have to arrive until 7; quite a few other volunteers had already been at work for an hour. When I arrived at the gym where we were to report, a bleary-eyed volunteer was telling another volunteer that she was caffeine deprived because Starbucks wasn’t open yet when she came by on her way to the race site. Reporting before Starbucks opens: that’s early!

I had expected the volunteers to be of various ages. Standing around with the 20 or so packet-pickup volunteers as we waited on our instructions, I noticed that most of them looked college age. Only one other guy besides me looked like he might be past fifty. I seldom have the opportunity to double the diversity of a group just by being present!

I ended up positioned midway on the staircase down to the gym floor, waiting for arriving racers to spill over the top step, then announcing (with gestures), “This way to packet-pickup if you’re pre-registered. That way if you need to register.” Racers started trickling down the steps about an hour and a half before the race. It takes only five minutes to pick up your bib and pin it to your shirt. What were they planning to do for the other hour and twenty-five minutes? I never showed up more than a half hour before a race I was going to run in, and that still seemed like too much time. 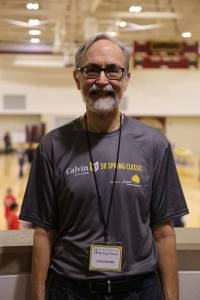 The flow gradually increased, reaching peak volume about a half-hour before race time. Runners never came in a steady flow but in fits and starts, as if the parking lot where they left their cars were spitting them out at intervals. After a few dozen repetitions, “packet-pickup if you’re preregistered” started sticking to my tongue. The flow of runners abated about fifteen minutes before race time, and, with five minutes to go, there were just a few still entering the gym, rushing now to get ready before the starting gun. A minute to go, and the gym went still. The packet pickup volunteers started putting things away–too soon, it turns out, since another half-dozen runners came in, too late to make the start of the race but planning to join in anyway. A life ungoverned by the clock probably feels freeing, but it has its downside.

During my hour and a half on the stairs I had seen about a thousand runners go by. They tended to come with others rather than alone. There were quite a few families apparently intending to run together. Every so often a bunch of people came past all wearing similar t-shirts, obviously groups that wanted to be identified as such during the race. When I ran last year, I  was at least halfway back in the pack and surrounded by people of diverse ages, all the way from little kids to a guy that looked ten years older than me. Now having seen virtually all the runners come by me on the stairs, though, I realized that, like the volunteers, there wasn’t as much diversity among runners as I thought. There were lots of people who looked to be in early adulthood or perhaps late adolescence. The families often had parents probably in their thirties and kids as young as about six. There weren’t as many middle-aged adults, and even fewer seniors–only about five percent of runners looked as if they were past 60.  Seeing virtually all the runners made me realize that when I ran last year I must have looked old to spectators and the other participants. It hadn’t occurred to me before, but now it seemed likely that at least some around me had thought I was too old to participate in an activity that clearly favors the young.

Fortunately, this river of young faces eventually bore down the stairs an acquaintance of mine named Roger. Roger is a retired professor who is about fifteen years older than me, and he was dressed not as a spectator but as a participant. I wished him a good run, and he said, no, he and his wife don’t run anymore, but they would walk the course. I felt rather foolish for having been concerned how I might have looked; if Roger didn’t worry about it, why should I? And if he was going to walk the course, I certainly could have run it slowly!

Once the gym emptied of runners, we packet-pick-up people proceeded to pack up the packets that weren’t picked up by participants  (say that real fast five times), took down signs, and folded up tables.  I helped tidy things, had some coffee (mercifully, caffeine became available in the gym midway during our volunteer shift) and turned in my volunteer’s badge. By the time I left the gym heading for my car, the race had been going on for about twenty minutes. I had to walk right by the finish line, so I stopped and watched the runners.

Runners coming in a bit over the twenty minute mark were much different from the runners who had been around me when I raced last year. These close-to-twenty-minute folks had trim, athletic bodies and nearly all looked to be between their late teens and mid-thirties (though there were a few exceptions). They were all serious about the race, pushing right to the finish line, straining to keep the last few precious seconds from spilling onto the clock. Upon crossing the line, quite a few of them immediately grasped a wrist to turn off a stopwatch, looked anxiously at the time, then reacted with either delight or consternation.

They reminded me of myself nearly forty years ago, in my first couple races. I would have been finishing within about a minute of where they were, and would have been straining just as hard and fretting just as much about my speed. Time changes things, though, and one of the things that time changes is preoccupation with time. In the dozen or so races I’ve entered over the past four decades, I’ve gradually slid back in the pack and simultaneously became less concerned (though, as I had realized, not unconcerned) about time or position.

“Again I saw that under the sun the race is not to the swift,” said the writer of Ecclesiastes, “but time and chance happen to them all.” In a strictly literal sense during a single race that’s not accurate, since if one swift runner stumbles, it won’t be a Roger but another swift runner that comes to the fore. Time will eventually hobble every fast runner, though. As I watched, I thought of the racers who would be coming to the line minutes after these fast-movers. I knew the finishers would take on a different look over the next several minutes–many would be older or younger than these young adults, heavier or with poorly toned extremities, their  gaits looking less lubricated. I knew what those runners would be like from experience–I was back with them last year! Not only would those runners look different, but they would feel different–less fretful, more satisfied with whatever the clock happened to read.

I left the finish line after a couple minutes; I had other plans for the day. No matter how long I had stayed I never would have seen Roger; he later told me that his hip was bothering him so he didn’t make it the full five kilometers. He was happy to have been there supporting a cause he believed in, though.

Maybe the writer of Ecclesiastes was saying that the reason that the race doesn’t belong to the swift because the swift runner intent on finishing first can easily lose the benefit that the race offers him or her. Maybe the race belongs instead to the Rogers, since that’s whom it provides with joy that won’t be lost regardless of where they finish, or even if they finish. So, I think I’ll be back as a runner next year regardless of how fast I’m able to go. Maybe one reason there are so few older participants is that not many of us have been able to accept running slowly. I’ve decided not to drop out like others have. After all, the race (and I’m not talking about the Calvin Spring Classic now) belongs to those who are glad being at the back of the pack, even if it takes them a lifetime to get there.

I am a fourth-generation American of Dutch ancestry and am trained as a clinical psychologist. In 2012, I retired from Methodist University in North Carolina to return to . Michigan to help family. I maintain a part-time therapy practice in Grand Rapids. I currently worship at Monroe Community Church in Grand Rapids. I can be reached at bobritzema@hotmail.com.
View all posts by Bob Ritzema →
This entry was posted in Body, Psyche and tagged 5K, aging, Calvin Spring Classic, older adults, race, running, volunteering. Bookmark the permalink.