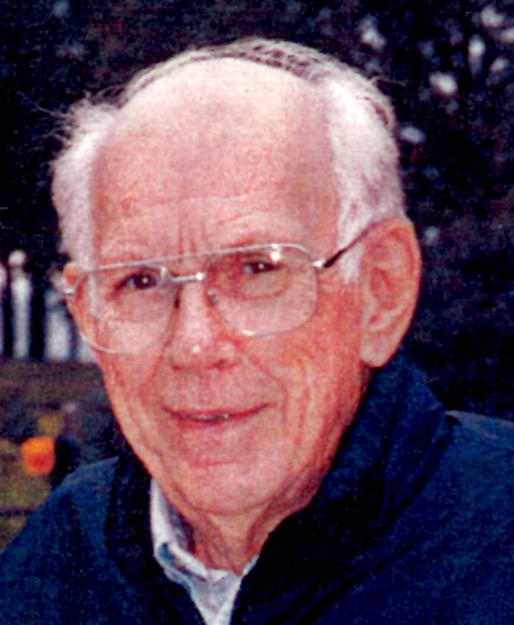 You’re never ready. My dad had heart surgery 25 years ago, carotid artery surgery 13 years ago, and memory problems for about 10 years that eventually cascaded into severe dementia. Three months ago, he reached the point where he was too incapacitated to remain at home any longer. I asked God why he didn’t take dad home rather than having him linger in such a diminished state. So I would have thought that I would be ready when I got a 4:15 a.m. call from the night nurse at the nursing home saying that she was sorry to inform me that, when the aide went in to turn him over, dad was not sleeping but dead. But I wasn’t ready.

My mom and I went to the nursing home as soon as we could pull on some clothes. Dad was lying on his back, a sheet up to his mid-chest, his head tilted back and his mouth open, as if he were frozen in mid-breath. He was still warm to the touch. It seemed he was simultaneously here and gone. Later in the day, mom, my sister, my brother, my siblings’ spouses and I had a private viewing at the funeral home before dad’s cremation. He was swaddled to his neck in a sheet. The white sheet and his white hair gave him a somewhat ethereal appearance, as if his body would be equally at home on earth and floating on a cloud somewhere.

This dual he’s-present-but-also-absent sensation has been common throughout the week. If anything, he has been more present than he had been for some time, albeit in the form of pictures, music, and writings rather than corporally. We’ve looked at photos from every decade of his life, heard recordings of him playing the piano, and read a list of things he is thankful for that he wrote before the carotid surgery. We also reviewed my mom’s notes of what he wanted at his memorial service. I hadn’t known his favorite Bible verses or his favorite hymns before then.

But dad’s also been very absent. When we went back to the nursing home two days after he died to retrieve his belongings, being there was disconcerting since it so seemed that he should be there, yet he wasn’t. I will never again hear his voice or feel his embrace in the years I will be on this earth, and that’s troubling–not so much painful, at least not right now, but disorienting, like the world has changed fundamentally, but not in a way that is evident to the senses.

Dad was a good man. He not only did the things that were expected of him—serving his country in WWII, working tirelessly to support his family, being present for the important events in his children’s and grandchildren’s lives—but he also was extraordinarily kind and generous. He was there for a family of Hungarian refugees who fled during the 1956 rebellion with just the clothes they were wearing; their successful adjustment to the US was largely due to him. He and the rest of our family were there in 2001 for a handful of Sudanese Lost Boys who had been resettled to Michigan in the dead of winter, dumped in an apartment over the long Christmas weekend with only tropical clothes to wear. In between those times of remarkable generosity, he opened up the family pool every summer to hundreds of neighbors, friends, and friends of friends, especially anyone with kids. He loved to see their delight as they splashed around, and made sure they knew they were welcome to return. He and my mom ran the senior program at their church for as long as they were able, providing memorable programs and a sense of community for scores of older adults. He went to dozens of rest homes in his later years to play the piano for residents, eager to brighten their days.

This world doesn’t have enough people whose main joy is to make others happy. It just lost one of them. I miss you, dad. 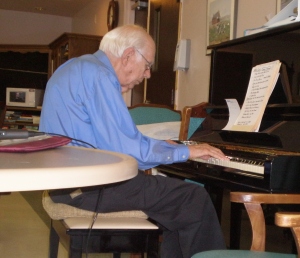 I am a fourth-generation American of Dutch ancestry and am trained as a clinical psychologist. In 2012, I retired from Methodist University in North Carolina to return to . Michigan to help family. I maintain a part-time therapy practice in Grand Rapids. I currently worship at Monroe Community Church in Grand Rapids. I can be reached at bobritzema@hotmail.com.
View all posts by Bob Ritzema →
This entry was posted in Death and tagged elderly, father, grief, life story, parents. Bookmark the permalink.

6 Responses to James A. Ritzema, RIP