Why Belong to a Church Where Everyone Is Younger Than Me?

Why belong a church whose members are all younger than me, most by several decades? The first time I visited Square Inch Community Church, I thought, “Not only am I older than everyone here, my kids are older than most of them.” I’m a retirement-age Boomer, and, judging by appearances, there were just two younger Boomers, quite a few Gen-Xers, and even more Millennials in attendance. Still, I kept coming back, and eventually joined.

Dozens of nearby churches are populated by people near my age. Why didn’t I join one of those? Am I trying to be hip, pretending to be younger than I am? Do I want whatever status accrues to being the oldest or most experienced person present? Do I dislike old people and not want to associate with them? If I’m trying to be hip, I’m not succeeding very well. I dress pretty conservatively, and miss many of the cultural references that my fellow congregants make. I don’t think I’m seeking respect for being the oldest, either. It’s nice when someone expresses appreciation for a comment I make based on my experience, but that doesn’t happen very often, and has little effect on me when it does. Nor do I dislike people my age; most of my closest friends are north of 60, and I like it that way.

So, why am I a member there? Well, why not? Should age make a difference in deciding who to worship with? Granted, many churches sort people into classes, small groups, and the like according to age. I’m not aware of anything in the Bible, in the sacred texts of other religions, or in the Christian tradition that supports such segregation, though.

Mostly, I like Square Inch for things unrelated to age. The liturgy is traditional, its components mirroring elements of the life of faith—confession, adoration, prayer, contemplation, fellowship. Thus, the services aren’t a venue for skilled performances by members of a worship team and aren’t designed to evoke an emotional response. Instead, the intent is to set a rhythm for the week—to disenchant us with the rhythm of the world around us and get us back in time with the cadence of God’s Spirit.

After the service, attending to a different beat continues at a “love feast.” Together we eat a simple meal of soup and bread. In sitting and eating with each other, we connect in ways that tend not to occur during the coffee-and-a-snack-while-standing conversations that take place at most churches. There is richness in how we know the other, and are known. People could choose to sit and eat with those their age—college students at one end of the table, young couples at the other end, and families with kids somewhere in the middle. That doesn’t happen (OK, it does to some extent with the college students), mainly because we are such a small group. Even if I tried to sit with others near my age (which I don’t), I would still be within conversational distance of someone at least a couple of decades younger. 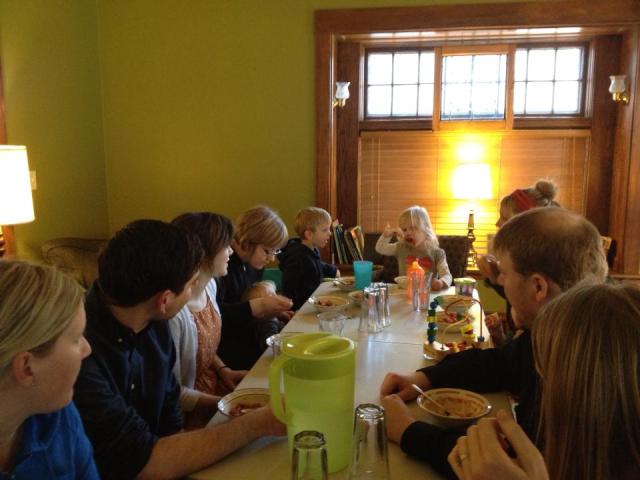 I find that age differences make mealtime conversations resonate for me more than they would otherwise. Doesn’t diversity usually have the potential of enriching faith? I have always been able to better appreciate the immensity of God’s kingdom and the depth of his love when I notice him at work outside my usual habitat—a different religious tradition, a different societal niche, a different culture, and, now at Square Inch, a different age cohort. We “Inchers” talk about our spiritual journeys and discover that God walks simultaneously with nascent adults stepping uncertainly into newfound identities, with middle adults carrying heavy burdens along the pathways of family and career, and with older adults looking back at the ground covered and ahead at what little of the journey still remains. I marvel at how he matches the pace of each of us, bracing us in the difficult places and picking us up again when we fall.

In talking with those much younger, I’m also reminded of myself at various ages. I think back to what it was like to have doubts that God existed, to wonder whether God was calling me to a particular career, or to lose touch with God when distracted by work and family. These memories move me to gratitude for God’s help and mercy all along the road. I’m reminded, too, of my two sons, and am thankful that God has been faithful to them on their spiritual journeys.

While at church activities, I talk about my life experiences much more than I remember doing when in churches where the grey hairs weren’t mostly mine. I regard memories of my faith journey not as bread to sustain me alone but as sustenance for others as well. Do those I talk to think that I’m a source of hope and inspiration, or that I’m a doddering old fellow blathering about the past? Maybe it’s a little of each. Biological families are often both blessed and embarrassed by their oldest members, and the same is probably true of families of faith. Thanks be to God for opportunities to bless and embarrass!

I am a fourth-generation American of Dutch ancestry and am trained as a clinical psychologist. In 2012, I retired from Methodist University in North Carolina to return to . Michigan to help family. I maintain a part-time therapy practice in Grand Rapids. I currently worship at Monroe Community Church in Grand Rapids. I can be reached at bobritzema@hotmail.com.
View all posts by Bob Ritzema →
This entry was posted in Spirit and tagged age differences, aging, baby boomers, Christianity, church, faith, God, seniors. Bookmark the permalink.

3 Responses to Why Belong to a Church Where Everyone Is Younger Than Me?