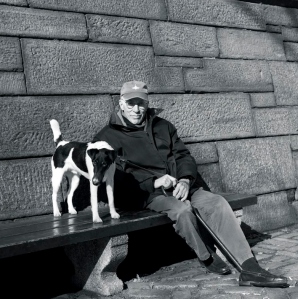 In his excellent article in the New Yorker about the rigors and rewards of growing old, Roger Angell, who at age 93 certainly knows something about the subject, describes what it’s like to be treated as if he is irrelevant:

“Here I am in a conversation with some trusty friends—old friends but actually not all that old: they’re in their sixties—and we’re finishing the wine and in serious converse about global warming in Nyack or Virginia Woolf the cross-dresser. There’s a pause, and I chime in with a couple of sentences. The others look at me politely, then resume the talk exactly at the point where they’ve just left it. What? Hello? Didn’t I just say something? Have I left the room? Have I experienced what neurologists call a TIA—a transient ischemic attack? I didn’t expect to take over the chat but did await a word or two of response. Not tonight, though. (Women I know say that this began to happen to them when they passed fifty.) When I mention the phenomenon to anyone around my age, I get back nods and smiles. Yes, we’re invisible. Honored, respected, even loved, but not quite worth listening to anymore. You’ve had your turn, Pops; now it’s ours.”

Over the last 80 years, the United States has improved substantially in caring for the physical needs of its elderly, so that our country ranked relatively high in a recent evaluation of the comparative well-being of older adults (we are 8th out of 91 nations). Our country also has done fairly well at reducing overt prejudice and discrimination against the elderly. As Angell points out, many older adults are honored and respected. However, that’s not the same as treating elderly persons in the way we treat other persons, for then they would receive a full hearing. I suspect that Angell’s friends aren’t aware that they have ignored his comments; they are just deaf to what he says. In a similar way, a woman I know in her 60s describes a younger acquaintance walking past her at a party without acknowledging her presence. Everyone else is greeted, but she has become invisible. (As Angell points out, women get treated as if they aren’t seen or heard at a much younger age than do men.)

The failure to notice or acknowledge the elderly seems to fit what Pope Francis wrote in his Apostolic Exhortation Evangelii Gaudium:

“We have created a ‘throw away’ culture which is now spreading. It is no longer simply about exploitation and oppression, but something new. Exclusion ultimately has to do with what it means to be a part of the society in which we live; those excluded are no longer society’s underside or its fringes or its disenfranchised – they are no longer even a part of it. The excluded are not the ‘exploited’ but the outcast, the ‘leftovers’.” Pope Francis, Evangelii Gaudium. Ch.2, I.

Henri Nouwen and Walter Gaffney (in Aging: The Fulfillment of Life) compared the plight of the aged in our society to that of the writer of Psalm 31, who laments how others react to him:

“Those who see me in the street flee from me.
I have become forgotten like one dead, out of mind.
I am like a destroyed vessel.”

At age 65, I’m still heard when I speak. For now, being male and employed is sufficient for me to stay out of the “leftover” category that Francis describes. However, I’ll inevitably become unseen and unheard if I live long enough. For now, it’s important that I deliberately look at and listen to all the older adults I encounter. Perhaps, if enough of us do that, we’ll render every older adult visible and audible. That will be a blessing to them, and to us.

I am a fourth-generation American of Dutch ancestry and am trained as a clinical psychologist. In 2012, I retired from Methodist University in North Carolina to return to . Michigan to help family. I maintain a part-time therapy practice in Grand Rapids. I currently worship at Monroe Community Church in Grand Rapids. I can be reached at bobritzema@hotmail.com.
View all posts by Bob Ritzema →
This entry was posted in Culture, Psyche, Relationships and tagged age discrimination, aging, elderly, older adults, Pope Francis, prejudice, Psalms, Roger Angell. Bookmark the permalink.