During Ash Wednesday services, the priest or minister makes a cross of ashes on the participant’s forehead and says, “Remember you are dust and to dust you shall return.” We begin the Lenten journey, in other words, by memento mori (Latin for “remember you will die”), a symbolic reminder of our eventual deaths.

We’re inclined to look with askance on those who think frequently of death. It wasn’t always so. The medieval memento mori tradition held that thoughts of death were beneficial to the faithful, helping them remember that life is fleeting and recognition insubstantial. Cultural artifacts that helped believers contemplate death were created. There are still chapels made of bones in several places in Europe. Paintings, mosaics, or sculptures of skulls, skeletons, or other reminders of death were sometimes displayed in churches. The following picture is of the Sedlec Ossuary in the Czech Republic, a chapel containing the bones of some 40,000 skeletons: 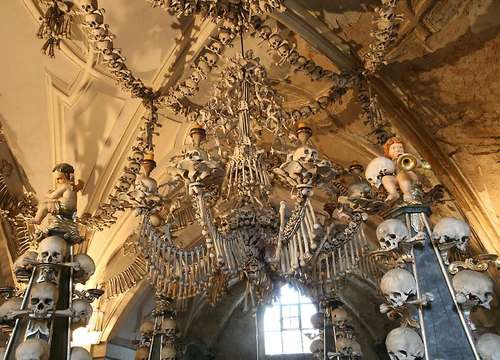 A subgenre of memento mori art is vanitas painting, which typically combines symbols representing status, accomplishments, or pleasures with symbols representing death. “Vanitas” is an allusion to Ecclesiastes 1:2: “Vanity of vanities, all is vanity.” The viewer is being reminded that success and pleasure are ephemeral compared to death.

The above vanitas painting is by 17th century Dutch artist David Bailly. He portrays himself as a young man holding a picture of himself in middle age (this according to art historian Heidi J. Hornik in Christian Reflection, from whom I derive my description of the work). There is a portrait of his wife as a young woman and several other pieces of art, representing his artistic accomplishments. Articles such as the flute, lute, and jewelry refer to the life enjoyed by the artistic class in Holland. Contrasted with these are reminders of mortality: the skull, the hourglass, the extinguished candle, the rolled up paper, and the dead flowers amidst the living ones.

As I age, reminders of my mortality affect me differently than they used to. I used to think Ash Wednesday was somewhat morbid, but now I accept and appreciate the imposition of ashes. I’ve gradually come to react more when I hear of someone dying, even if I didn’t know the person. I am especially affected if the person is near my age. I think more than I used to about what the moment of death was like for the person, what they thought of  their life, and how they will be remembered. I know that in asking these questions about them, I’m also asking about my eventual death.

Though the heyday of vanitas art was in the late middle ages, there are signs of a resurgence in it. Take, for example the following two pieces that were included in a show at the Grand Rapids Art Museum as a follow-up to ArtPrize 2013, a local art competition. The first, a self-portrait by Martha Hayden, juxtaposes skulls, fruit, and flowers, a combination characteristic of vanitas painting. The second is part of a series of photographs by Sara Lowthian titled “Prescription: Vanitas.” 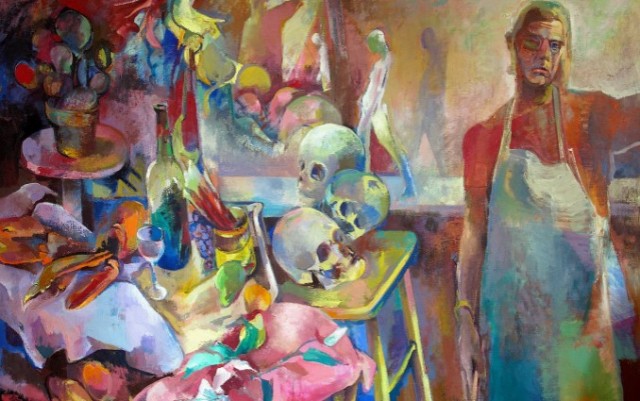 A few months ago I decided to contribute to the upsurge in such death-themed representations by creating my own vanitas self-portrait. I dressed in my academic regalia, mostly because the gown and hood are formal markers of status in academia. In front of me I arrayed several objects representing personal accomplishments or attachments—my diploma, some articles I had published, pictures of my children and grandchildren, and the crystal bowl I received when I retired from Methodist University. I filled the bowl with shredded paper symbolizing the eventual fate both of the thousands of progress notes I wrote during my years as a psychologist and of the hundreds of papers I have graded. I included several reminders of mortality—newspaper obituaries, fallen leaves, and a picture of the ossuary that contains the bones of 130,000 unknown soldiers who fell during the battle of Verdun. I look somber and a bit silly in the photo. I guess solemnity is a natural consequence of thinking about mortality, and maybe I look silly because our age is ironic, one in which anyone who is solemn seems clueless.

In chapter 4 of his “Rules,” St. Benedict advised his followers to “keep death before one’s eyes daily.” I’m slowly moving towards such death-awareness. Walking further down that path might help me become the sort of poor-in-spirit, mournful, and meek person that Christ called blessed.

I am a fourth-generation American of Dutch ancestry and am trained as a clinical psychologist. In 2012, I retired from Methodist University in North Carolina to return to . Michigan to help family. I maintain a part-time therapy practice in Grand Rapids. I currently worship at Monroe Community Church in Grand Rapids. I can be reached at bobritzema@hotmail.com.
View all posts by Bob Ritzema →
This entry was posted in Death, Spirit and tagged aging, ArtPrize, Ash Wednesday, dying, faith, memento mori, vanitas. Bookmark the permalink.