My Midlife Crisis? Which One?

I wrote earlier about the First, Second, and Third Spiritual Journeys of life. The Second Journey—having to do with some sort of reorientation during middle adulthood—encompasses the “mid-life crisis” of common parlance. This post will describe the concept of the mid-life crisis and compare it with my progression through midlife.

I should start by admitting that I probably didn’t ever have a full-blown mid-life crisis—and it is by no means assured that any but an unlucky few have their journey buffeted by any sort of midlife gale. Some researchers think nothing different happens in midlife than in any other phase of adulthood. Still, it does seem that many people have some sort of mid-life transition, crisis or not. Studies find that happiness dips in middle adulthood, suggesting that something is going on then. Writers on matters psychological, such as this post, describe midlife turmoil as common. So, perhaps the best advice is to not be surprised if nothing much happens to you at midlife, but also not be surprised if something does. 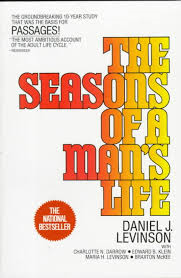 Yale psychologist Daniel J. Levinson was one of the main proponents of the idea that crisis is a hallmark of the transition from young adulthood to middle adulthood.  In his 1978 book The Seasons of a Man’s Life (he didn’t write about women’s psychological development until later), Levinson indicates that the settled life that most men attain by the 30s is disrupted by a period of reappraisal.  The man asks himself questions such as: “What have I done with my life?” “What is it I truly want for myself and others?” “What have I done with my early Dream and what do I want with it now?” Levinson claims that the answers to such questions are disconcerting:

“As he attempts to reappraise his life, a man discovers how much it has been based on illusions, and he is faced with the task of de-illusionment. By this expression I mean a reduction of illusions, a recognition that long-held assumptions and beliefs about self and world are not true.”

Mid-life is not the first time that we find that what once comforted us is illusory: Consider the 6-year-old who learns the truth about Santa Claus, or the 10-year-old who figures out that dad or mom isn’t the smartest/strongest/coolest parent around, or the 16-year-old who discovers that his or her nation, city, school, or social niche isn’t better than all others. Perhaps de-illusionment is a necessary part of development throughout life. The illusions lost in mid-life bring particular pain, though.

What transition did I go through in mid-life? As the title of this post suggests, I went through more than one. Here is a summary:

Most of these transitions occurred over a period of time ranging from a few months to a few years. In every case I was impelled by some degree of discontent, dissatisfaction, or de-illusionment. I plan to write about a few of these changes in more detail, exploring the factors that motivated me. In the meantime, here are the main points of this post: midlife transitions can occur in a variety of ways, including, as in my case, numerous moderately large life changes over the course of decades. Don’t expect a crisis, and don’t assume that, if a crisis occurs, it will look at all like someone else’s crisis.

I am a fourth-generation American of Dutch ancestry and am trained as a clinical psychologist. In 2012, I retired from Methodist University in North Carolina to return to . Michigan to help family. I maintain a part-time therapy practice in Grand Rapids. I currently worship at Monroe Community Church in Grand Rapids. I can be reached at bobritzema@hotmail.com.
View all posts by Bob Ritzema →
This entry was posted in Psyche and tagged adulthood, aging, Daniel Levinson, life review, life story, midlife, midlife crisis. Bookmark the permalink.

2 Responses to My Midlife Crisis? Which One?