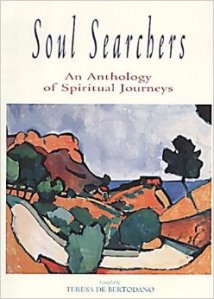 Soul Searchers: An Anthology of Spiritual Journeys (Eerdmans, 2002), complied by freelance editor Teresa de Bertodano, is a collection of biographical, autobiographical or fictional accounts of life events that convey something of who each person was or was called to be. Life is often described metaphorically as a journey, and de Bertodano adopts this convention.

Though each person’s journey is all of one piece, it can also be thought of as divided into segments. I think that de Bertodano’s way of dividing the journey—an approach that she attributes to Gerald O’Collins’ Second Journey–to be particularly useful. The
first segment—the First Journey—occurs during childhood and youth, and includes
seeking one’s place in the world and achieving a sense of identity. At the end
of the first journey, the person has entered adulthood. The Second Journey
entails a change of direction somewhere midway between young adulthood and
elderhood. The person typically encounters some obstacle in the path—in the
words of Richard Rohr, there is some sort of falling, some failure or
disappointment. This may lead to a totally new direction, or to a different
understanding of the path that one is on. The Third Journey occurs near the end
of life—whether that end is sensed in youth or the fullness of years—and
prepares the person for death.  De Bertodano notes, “the Third Journey is the only one we can be sure of completing.” We may never acquire a core identity or the greater maturity that comes with the Second Journey. We will, though, all take the last journey to the grave.

This blog is devoted to the second half of life—to the Second and Third Journeys. Just to give some sense of the stories about these journeys De Bertodano included in her anthology, here are some examples that I was already familiar with and you may be as well. The Second Journey section included stories from the lives of Moses, St. Paul, St. Ignatius Loyola, John Wesley, Thomas Merton, and Charles Colson. Among the stories in the Third Journey section were the deaths of Abraham and Sarah, St. Thomas More awaiting martyrdom, Fyodor Dostoevsky’s near execution, and Dietrich Bonhoeffer in the concentration camp. Though the focus of the anthology is on spiritual journeys, most of the selections were journeys of the psyche as well.

I have written previously about life stories. For me, and I suspect for many others, the First and Second Journeys compromise much of what is most central to my life story at this point (I’m not far enough into the Third Journey for it to be included in that story). Reading the first two sections of de Bertordano’s anthology is helping me understand my own First and Second Journeys, and the third section is informing me about the journey that still awaits me. I recommend de Bertodano’s book (unfortunately it is out of print and has to be obtained from a used book seller) for those interested in life review.

I am a fourth-generation American of Dutch ancestry and am trained as a clinical psychologist. In 2012, I retired from Methodist University in North Carolina to return to . Michigan to help family. I maintain a part-time therapy practice in Grand Rapids. I currently worship at Monroe Community Church in Grand Rapids. I can be reached at bobritzema@hotmail.com.
View all posts by Bob Ritzema →
This entry was posted in Death, Psyche, Resources, Spirit and tagged aging, anthology, calling, faith, journey, older adults, purpose, Teresa de Bertodano. Bookmark the permalink.