How Well Do You Grant Your Parents Independence?

I found an interesting observation by Harvard professor James Wood in his recent  New Yorker article on memoirs written by the children of several mid-twentieth century writers.  Wood notes, “To bestow on one’s parents their independence is also to announce one’s own independence from them.”  The context here was the ability or inability of each memoirist to recognize that his or her father (all the writers described by their children were males) had a literary existence that went beyond his role in the family.  The point can be applied more broadly:  we all need to recognize that there is more to our parents than their parental role if we are to fully be more than just their children.

This granting independence to our parents begins early in life and, if we are to be emotionally healthy, needs to continue for decades thereafter.  The infant has no self independent of her or his caregiver, and any separation from the caregiver seems to the infant to be abandonment.  Eventually, though, the child accepts times of separation without protest—in the process granting the caregiver separate existence—and so acquires a sense of self separate from the parent.  A dozen years later, adolescents seek further separation.  The effort to become independent isn’t only a desire for freedom to choose activities, friends, and the like.  It is also a matter of both parent and child recognizing that the teen is not just a member of the family but also is a person in his or her own right.  This recognition occurs successfully only if both can recognize the same about the parent.

Though much developmental theory describes independence as something accomplished by the end of adolescence, my professional experience suggests otherwise.  As a psychologist, I’ve treated many adults, including some who are at or past mid-life, who haven’t fully recognized the independence of one or both parents.  I think of one client, a woman in her early 50s, who as the oldest child in her family had been given considerable responsibility for younger siblings and became her mother’s confidant.  Though her mother also had a successful career as a teacher, my client never quite accepted her as a person with a full life outside the family.  She worries a good deal about her mother (who is now in her late 70s) and thinks her mother needs more assistance than I suspect is the case.  In not seeing her mother’s separateness, my client also traps herself in the role of responsible older child who works hard to do the right thing yet never feels appreciated.

I have lived at some distance from my parents since my early 20s.  This not only provided me with independence, but also helped me give it to my parents.  On my twice-yearly visits home, I enjoyed hearing about their travels, their friends, and the variety of neighbors, relatives, and acquaintances they invited to swim in their pool.  By the time I was in my 40s, they were leading a large seniors group at their church.  My dad, who played the piano, went to senior care facilities to play music from the thirties and forties.  During one of my Christmas visits, my parents were hosting a group of “Lost Boys”—refugees from the Sudanese conflict who had just been resettled to West Michigan.  Learning that the “boys” had no warm clothes, my parents outfitted each of them with winter coats and gloves.  Our Christmas pictures from that year prominently feature grinning, dark-skinned Africans alongside our uniformly light-skinned family.  I loved to hear of my parents’ exploits, and was glad that they showed hospitality far beyond the confines of the family. 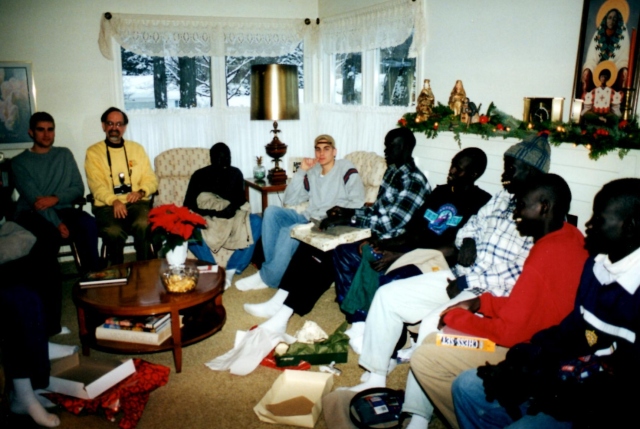 Christmas, 2000–With the Lost Boys

For the past year, I have been in their home most of the time, helping my mom care for my dad.  Tragically, he has lost his independence to dementia, and my mom is more reliant on assistance from my siblings and me than she had ever been before.  She is still very much her own person, though.  She asks for advice at times; I give it tentatively, and am not at all troubled that she doesn’t always take it.  It’s important to me to still see her as an independent person with her own beliefs, values, and priorities.  By so doing, I am granting the same to myself.

I encourage those who are at or past midlife yet still feel too tied to their parents—too desirous of approval, too reluctant to make choices on their own, too determined to change their parents, or too worried about their parents’ welfare—to work on granting their parents (and themselves) independence.  If you’ve tried to separate yourself from your parents without success, consider therapy.  Individuation from one’s parents will help you appreciate both them and yourself more.

I am a fourth-generation American of Dutch ancestry and am trained as a clinical psychologist. In 2012, I retired from Methodist University in North Carolina to return to . Michigan to help family. I maintain a part-time therapy practice in Grand Rapids. I currently worship at Monroe Community Church in Grand Rapids. I can be reached at bobritzema@hotmail.com.
View all posts by Bob Ritzema →
This entry was posted in Relationships and tagged aging, Family, Lost Boys, older adults, parents. Bookmark the permalink.