May is Older Adults Month, per government proclamation.  This is a tradition; the site for the federal Administration on Aging states that “Every year since 1963, May has been a month to appreciate and celebrate the vitality and aspirations of older adults and their contributions to our communities.”  President John F. Kennedy first proclaimed “Senior Citizen’s Month” following a meeting with representatives of the National Council on Senior Citizens.  The name was changed to “Older Adults Month” in 1980.

There is a theme for each year’s Older Adults Month.  This year’s theme is “Unleash the Power of Age.”  Frankly, I’m underwhelmed and a bit puzzled by the phrase.  Does age itself have power, or do the aged?  If the reference is to the power of aging itself, does that refer to free radical damage, decreased vital capacity, telomere shortening, and the like?  Are those things we want to celebrate?  I’m equally nonplussed by the “power” part of the phrase.  Are we to think of power as the political power of the aged, as evidenced by AARP’s defense of benefits for seniors that contribute to the unsustainable budget deficits we currently face?  Are we to think of the Gray Panthers, the progressive activist group founded in 1970 that not only opposes ageism but also fights for a variety of peace and justice issues? 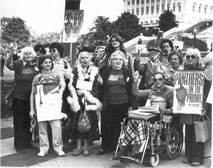 I wouldn’t mind learning more about them, but I suspect that’s not what the AOA has in mind.    I don’t really know what to make of this theme.  I think I prefer last year’s theme: Never too Old to Play.

I am a fourth-generation American of Dutch ancestry and am trained as a clinical psychologist. In 2012, I retired from Methodist University in North Carolina to return to . Michigan to help family. I maintain a part-time therapy practice in Grand Rapids. I currently worship at Monroe Community Church in Grand Rapids. I can be reached at bobritzema@hotmail.com.
View all posts by Bob Ritzema →
This entry was posted in Culture, Resources and tagged aging, elderly, Gray Panthers, older adults. Bookmark the permalink.