No Act of Love is Ever Wasted; The Spirituality of Caring for Persons with Dementia by Jane Marie Thibault and Richard L. Morgan (Nashville: Upper Room Books, 2009) is directed at family members, caregivers, and clergy whose lives bring them in contact with individuals suffering from dementia.  Thibaut is a gerontologist and Morgan is a retired chaplain and counselor; each has considerable experience working with cognitively impaired elders and their families. 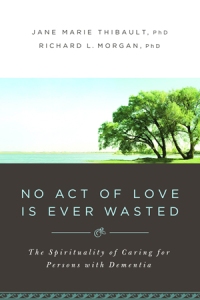 As the title suggests, the authors’ main purpose is to provide hope and a sense of meaning for those who struggle with thoughts that the cognitively impaired person is no longer him/herself and that there is no point in doing anything more than meeting that person’s physical needs.    Those with dementia still have intact souls despite the loss of cognitive function, they maintain.  By ‘soul’ they mean that part of the self that seeks meaning in relationship with the ultimate; though they don’t limit this seeking to any religious tradition, it’s clear that both of them have a conception of the ultimate that is Christian in nature.  Not only do we all have souls, they suggest, but we are all on a spiritual path, and the interaction between caregiver and care receiver is part of this spiritual journey.  As they put it, “We may well discover that caring for a person with dementia is a mutual spiritual path; they find Christ in us, and we in them.”  Thus, the spiritual needs of both parties can be satisfied.

I particularly appreciate the multitude of examples that the authors provide.  One memorable account is Thibault’s description of the way she found to minister to Frankie, her mother-in-law, who suffered from vascular dementia:

“As soon as I took her hands in mine and touched her shoulder to let her know I was with her, she responded by clutching my hand.  Then I would stroke her thin hair and gently begin to brush it.  Gradually she relaxed into the brushing, became calm, and began talking.  Usually she talked about her parents and nine brothers and sisters, reliving scenes from her childhood.  Interestingly, this daily hair-brushing ritual had a positive effect on me as well.  It seemed that as I brushed her hair, I also symbolically brushed away the cares and stresses of my own day.  Because there was nothing else to do, I was forced to live in the present moment with Frankie, and the experience was surprisingly relaxing.”

In caring for my dad, who has dementia, I tend to focus too much on whatever task is at hand.  Thibault’s experience is a good reminder to just be present in the moment and to attend to ways to make the time together emotionally satisfying for both of us.

I also appreciate the authors’ awareness that those with dementia inhabit a different world than the rest of us.  Morgan in particular seems to have a genius for entering into whatever reality the person has constructed and offering comfort within that structure.  For a woman who thought he was a priest, he listened to her confession and prescribed penance; for someone who was concerned that President Hoover is ruining the country, he agreed that a depression might result; for a patient who called him her son, he apologized for not visiting more and promised to do better.  In each case, trying to wrest the person momentarily into consensual reality would have done violence to their world.  The authors even discourage efforts to get a loved one to remember family members.  As they put it: “If a caregiver spends intentional, loving time with the care receiver, even if the receiver doesn’t recognize him/her, often the care receiver feels the love at some deep, soul level.  If you choose to do an act of love, does it really matter whether the person recognizes you?”

The last two chapters are aimed more at clergy than at caregivers or families, and I didn’t find them particularly helpful.  Perhaps they should have been put in a separate book written for clergymen and other professionals.  Overall, though, the book offers much-needed encouragement and spiritual direction for those struggling with the cognitive decline of a family member.

I am a fourth-generation American of Dutch ancestry and am trained as a clinical psychologist. In 2012, I retired from Methodist University in North Carolina to return to . Michigan to help family. I maintain a part-time therapy practice in Grand Rapids. I currently worship at Monroe Community Church in Grand Rapids. I can be reached at bobritzema@hotmail.com.
View all posts by Bob Ritzema →
This entry was posted in Relationships, Spirit. Bookmark the permalink.